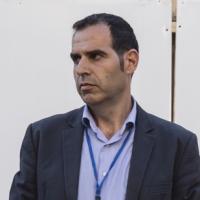 Graduated in pharmacy at the University of Florence, in addition to working behind the counter, he devoted most of his time to organizing exhibitions and cultural events. As soon as he returned to Sicily he was called to join the Board of Directors of the Institution Fiume, the body that manages the Teatro Naselli di Comiso, a position he held from 2001 to 2008. In 2007-2008 he was the organizational director of the "Costaiblea Film Festival" by Vito Zagarrio. From 2008 to 2010 he is the artistic director of "Settembre Kasmeneo". In 2009 and 2010 he brought to Sicily two edition of the "Demo's Lady Award", a musical award dedicated to female talent created by Michael Pergolani and Renato Marengo in collaboration with Radio 1 RAI. In 2010 he created the literary festival "A Tutto Volume- Libri in Festa a Ragusa" now in its tenth edition. Since 2011 he has been a member of the Board of Directors of the Gesualdo Bufalino Foundation. Since 2012 he has been taking care of the "Caffè Letterario" national fiction contest for Moak spa, now in its 18th edition and the "Fuori Fuoco Moak" international photography competition, now in its fifth edition.