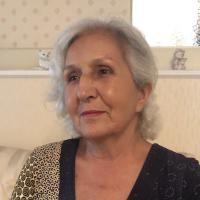 After studying during the first half of the 1960s at the Magistral Institute "Mazzini" in Vittoria and having Bufalino as a teacher, he began his university studies in Catania. In 1972 he graduated in Pedagogy. He taught Literature at middle schools until 2011. He is currently a member of the Foundation's Board of Directors representing his sister, Giovanna Leggio Bufalino. Married, mother of two, she lives in Vittoria.