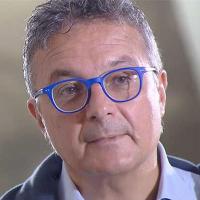 Graduated in Moral Philosophy at the University of Rome "La Sapienza"; in 1994 he obtained his PhD in Italian Studies. He is currently professor of contemporary Italian literature at the University of Sassari.
He has published various literary essays, prefaces and articles dedicated, among others, to Bertolucci, Borgese, Brancati, Bufalino, Consolo, Fiore, Giudici, Sciascia, Soldati. Already editor of "Nuovi Argomenti", an expert on Sicilian literature, he was the author of numerous essays: Storia di Sciascia (Laterza 1994); Ungrateful masters. Speech on the critique from Croce to the contemporaries (Theoria 1995); All for dinner at Don Mariano. Literature and mafia in the Sicily of the new Italy (Bompiani 1996); Unhappy modernity. Essays on the Sicilian literature of the twentieth century (Avagliano 2003); Prohibited ways. Public diary and counter-verse 2003-2006 (Gaffi 2006); Three bourgeois writers. Soldati, Moravia, Piovene (Gaffi 2007); The reason in absentia. The militant critique in the times of fundamentalism, (Donzelli 2007); Review. Instructions for use (Donzelli 2008); New prohibited directions 2006-2009 (Gaffi 2009); The suicide of socialism. Investigation on Pellizza da Volpedo (Donzelli 2009); The broken epic. Rhetoric and anti-rhetoric for Garibaldi (Medusa 2011); Passage in Sardinia (Giunti 2015); Passage in Sicily (Giunti 2016); Benedetti Toscani. Thoughts in smoke (The ship of Theseus 2017); Escapes and chases. Still on the Twentieth Century (Inschibboleth 2019); Isolitudini. Literary Atlas of Islands and Seas (The Ship of Theseus, 2019).
He collaborates with "The Index of Books of the Month", with the newspapers "Avvenire" and "La Stampa". For years he has held a column of reviews of Italian fiction in the weekly "Diario".
In 2008 he was awarded the "Brancati Award" for the essay section with the book La ragione in contumacia. The militant critique in the days of fundamentalism; in 2011 he won the “De Sanctis Foundation Award” in the special section of the Presidency of the Council of Ministers with his book L'epopea infranta. Rhetoric and anti-rhetoric for Garibaldi; in 2019 he won the "Premio Nino Martoglio" with his book Isolitudini. Literary Atlas of Islands and Seas.